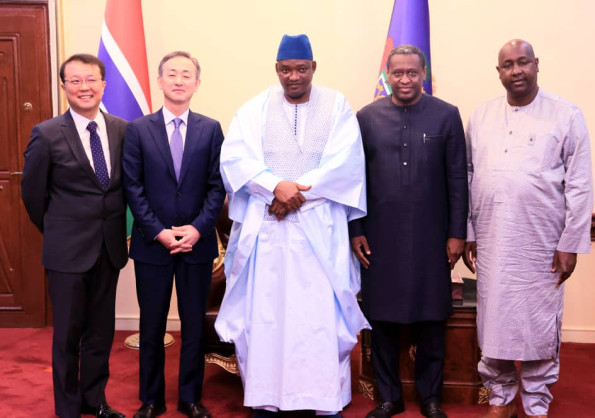 President Adama Barrow, Friday, 24th June 2022, received a delegation led by the Korean Ambassador to The Gambia, H.E. Kim Ji-Joon, at the State House in Banjul.

The team was in Banjul to announce the delivery of sample rice seeds to increase rice production in the country.

Ambassador Ji-Joon said the rice variety, when successful in The Gambia, can double the country’s current rice production capacity.

He said the rice is adaptable to different soil conditions and was successfully tested in Guinea and Senegal. Ambassador Ji-Joon said it is the same rice variety that Korea used to revolutionize its rice production and food security concerns in the 1970s. He said he hopes to replicate the same in The Gambia as well.

The Korean team was accompanied to the State House by the Minister of Agriculture, Dr. Demba Saballly. Dr. Sabally said the Korean rice had been delivered to the National Agricultural Research Institute (NARI) and will be planted in July. Honourable Sabally added that the variety of rice currently produced yields about four tonnes per hectare, while the Korean variety will yield about seven tonnes per hectare.

Honourable Sabally revealed the planting would be distributed among 25 hectares around the country. He noted that the success of this trial would help to expand rice production in the country away from its traditional regions in CRR and URR.

Distributed by APO Group on behalf of Office of The President- Republic of the Gambia.