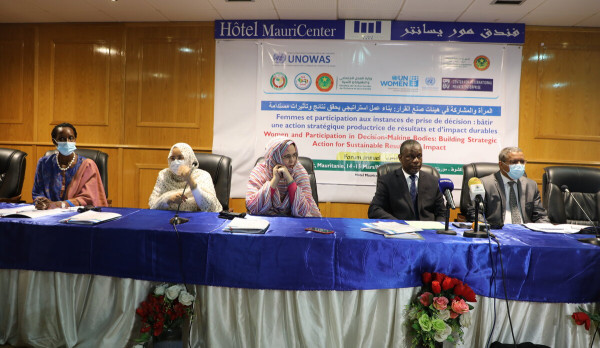 Organized by the United Nations Office for West Africa and the Sahel (UNOWAS) and the Economic Community of West African States (ECOWAS), with the support of the Mauritanian authorities, the theme of the Forum was “ Women and Participation in Decision-Making Bodies: Building Strategic Action for Sustainable Results and Impact.”

In the presence of Mr. Sadfy Sidi Mohamed, Secretary General of the Ministry of Social Action, Children and Family of Mauritania, representing Minister Aha Mint Haroune Ould Cheikh Sidiy, this first Women’s Forum brought together more than a hundred women and men from seventeen countries of West Africa and the Sahel, as well as representatives of the United Nations system and the Mauritanian government.

In her intervention, the Deputy Special Representative of the United Nations Secretary-General stressed the importance women’s role in peacebuilding and development. “Women’s effective participation in decision-making is vital to achieving the Sustainable Development Goals,” she said. Ms. Biha also welcomed the holding of this regional consultation which, she said, “will make it possible to define the best strategies so that men and women, in equal shares, contribute to the eradication of the major evils that delay the development momentum and stability of the subregion”.

For their part, the participants took stock of the role played by women in decision-making bodies, in defense and security forces, in prevention and management of conflicts, in negotiation, mediation and peace processes, in the prevention and fight against violent extremism and terrorism, as well as in the private and judicial sectors.

At the end of the two-day meeting, participants launched the Nouakchott Call for the Effective and Civic Participation of Women in Decision-Making processes, which contains a series of recommendations, made to the attention of the authorities of the countries, regional organizations and partners of the subregion.

On the sidelines of the Women’s Forum, the Deputy Special Representative of the United Nations Secretary-General for West Africa and the Sahel, Ms. Giovanie Biha met with the Minister of Foreign Affairs, Cooperation and Mauritanians Abroad, Mr. Ismaël Ould Cheikh Ahmed, and the Executive Secretary of the G5-Sahel, Mr. Eric Tiaré.  With her interlocutors, she exchanged views on various topics relating to peace and security in the subregion and reiterated the commitment of the United Nations toward a strengthened partnership with Mauritania and the countries of the subregion.

Distributed by APO Group on behalf of United Nations Office for West Africa and the Sahel (UNOWAS).