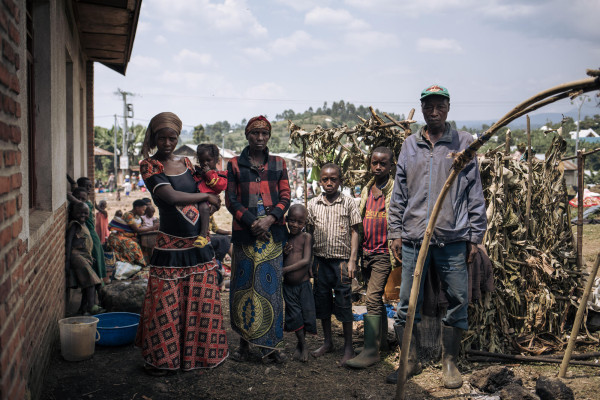 “The whole family was in the field working when the shooting started. We ran away and walked for three hours to Rumangabo in the rain,” says Ponsie Benda, 54. “We couldn’t get back to the house. We left with what we had on us.”

When clashes between the M23 armed group and the Congolese army came close to his village, the father of 13 children found refuge in Virunga National Park’s primary school in Rumangabo in June.

Like Ponsie, more than 190,000 people have had to flee their homes since late March 2022 in the territories of Rutshuru and Nyiragongo, in North Kivu province, after the resurgence of the M23 armed group and the intermittent clashes with the Congolese army.

PONSIE BENDA (RIGHT), 54, AND HIS WIFE AND 13 CHILDREN WERE DISPLACED AFTER FIGHTING CAME CLOSE TO THEIR HOMETOWN“We sleep outside. I built this shelter with wooden sticks. We eat boiled leaves from Monday to Sunday. My wife takes them from people’s fields, asking the owners first. There is mutual help because the community knows how much we are suffering.”

Most people have gathered along the national road linking Rutshuru to Goma, the capital of North Kivu, often in overcrowded sites.

“We sleep outside. I built this shelter with wooden sticks. I’m going to get banana and eucalyptus leaves to cover it. That way at least the children will be a bit protected,” says Ponsie.

When he and his family arrived in Rumangabo, the school’s classrooms were already full, and they had no choice but to settle outside in the yard.

At the Rugabo stadium in Rutshuru-centre, more than 1,400 families have gathered. The UNHCR has built community shelters, but even so, conditions remain extremely precarious: about 35 families share a tent measuring 18 by five metres.

“When it rains, the water floods the ground in the shelters and we spend the night in the water,” says Agrippine N’Maganya, 53, who arrived in Rutshuru with six of her 10 children over four months ago.

“The others must be in Uganda by now… I have no news of them since the flight,” she says.

“The proximity in the internally displaced persons (IDP) sites, combined with the lack of showers and latrines, is a major risk factor for the spread of infectious diseases such as measles or cholera,” says Bénédicte Lecoq, Médecins Sans Frontières (MSF) emergency coordinator.

In addition to the lack of shelter is the lack of food. “We have nothing to eat. Sometimes, people I know from my village give me some food that they collected in the neighbourhoods,” says Obed Mashabi, 20, who found refuge in Rugabo stadium at the end of March.

“We eat boiled leaves from Monday to Sunday,” adds Ponsie. “My wife takes them from other people’s fields, asking the owners first. There is mutual help because the community know how much we are suffering. They share what little they have.”

“The people we treat have empty stomachs,” says Lecoq. “It’s essential to increase food distributions or the situation could get even worse.”

At the Rutshuru general referral hospital, the MSF-supported unit for severely malnourished children has been full for several weeks, with a bed occupancy rate of 140 per cent. In the health structures that our teams are supporting in Rutshuru and Nyiragongo territories, the average number of consultations often exceeds 100 per day. The three main diseases observed are malaria, respiratory infections and diarrhoea.

“Given the scale of the needs, our teams cannot be everywhere. The health structures are overwhelmed and face a severe lack of medicines. In the face of this emergency, more actors must mobilise to ensure that all people can access care,” says Lecoq.

OBED MASHABI, 20, FOUND REFUGE IN RUGABO STADIUM AT THE END OF MARCH“We have nothing to eat. Sometimes people I know from my village give me some food that they collected in the neighbourhoods. We have food in the village, in the fields, but we can’t go back. The war continues there. Everything must be rotting.”

Beyond the immediate needs, the long-term consequences for the affected communities are also a source of concern. Most are dependent on agriculture, so the lack of access to their fields for weeks or even months could exacerbate food insecurity for thousands of people in the region.

“We have food in the village, in the fields, but we can’t go back. The war continues there. Everything must be rotting,” says Obed.

While the crisis has been ongoing for several months, Agrippine, Ponsie and Obed all lament the lack of humanitarian assistance received so far. “I have never received any food distribution, no basins, no pots; nothing,” says Agrippine. “No one has come here. If we had received aid, we wouldn’t be standing outside like this,” adds Ponsie.

The recent flare up of violence in Rutshuru and Nyiragongo territories is compounding an already dire humanitarian situation with an estimated overall 1.6 million displaced people and over 2.5 million people in need in the North Kivu province as of June 2022.

“I have no hope of going home soon. There is no improvement,” she says. Ponsie shares her discouragement. “Why is there still war in North Kivu? This is not the first time we have had to flee. I don’t know how my children can grow up in war.”