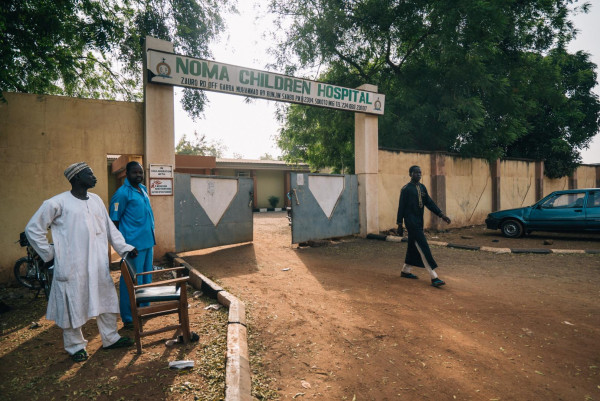 As Chief Medical Director at the Sokoto Noma Children’s Hospital in the northwest corner of Nigeria, Dr Shafiu Isah dedicates his days to treating children suffering from a neglected disease that few people have even heard of.

Noma is a gangrenous disease that attacks facial tissue and bone. Without treatment, it kills around 90% of its victims, most of whom live in hard-to-reach rural areas, within just a few weeks. “Due to extreme poverty and lack of awareness, unfortunately, a lot of these children die at home without even making it to the hospital,” Dr Isah says, which in turn exacerbates the substantial knowledge gaps regarding this preventable and treatable disease.

In the absence of reliable epidemiological data, a 1998 World Health Organization (WHO) global estimation of 140,000 new cases yearly remains the most widely cited source on noma. The majority of these cases are found in sub-Saharan Africa in children between the ages of two and six.

Even for those who ultimately survive the disease, if not treated immediately, it takes mere days for them to be left with severe facial disfigurements that make it hard to eat, speak, see or breathe. In turn, this often leads to severe stigmatization within their communities and a range of accompanying human rights violations.

“We’ve had cases where when the patient presents to the hospital, the whole of the lower jaw is already gone, or the whole of their nostril pathway is gone,” says Dr Abubakar Abdullahi Bello, Chairman of the Medical Advisory Committee at Sokoto Noma Children’s Hospital.

“But if the cases present to the hospital early, then they don’t have such issues. That’s what we are advocating for. With early admission, we can also reduce the duration of the stay in the hospital and these patients will not require surgical intervention.”

Noma can be prevented by basic public health interventions such as improving nutrition and oral hygiene; controlling comorbidities such as measles, malaria and HIV infection; and improving access to routine vaccinations.

In recent years, Nigeria has sought to increase awareness of noma and scale up its response activities as part of a commitment to eliminate the debilitating disease. Since 2016, it has been among 10 priority countries to form part of the World Health Organization’s (WHO) African Regional Noma Control Programme.

Nigeria has developed and implemented the programme’s national action plan for noma prevention and control in collaboration with WHO and other partners.

The Nigerian Ministry of Health has integrated noma into its existing surveillance system and incorporated it into the curricula of all national and district health professional schools, while the country now commemorates an annual National Noma Day in November each year.

Funding from WHO, as well as Médecins Sans Frontières (MSF), has also helped the Ministry to scale up training of primary care workers, with 741 having received training on noma in 2021 and the first half of 2022.

On 28 July 2022, WHO launched a new free and interactive online noma course through OpenWHO, the first WHO platform to host unlimited users during health emergencies.

“This course will be a useful self-learning tool for health workers to increase their capacity to prevent, identify, treat and refer noma considering both public health and human-rights aspects. Officers in charge of noma at the national and district level can also utilize the course material to train primary care workers,” says Yuka Makino, a technical officer for oral health at the WHO Regional Office for Africa.

Back at Sokoto Noma Children’s Hospital, Dr Isah is encouraged by his country’s increased focus on noma after so many years of neglect. “This disease is still not very well known in our communities, including among health care workers, who often mistake it for cancer or other illnesses. But I am optimistic that this is beginning to change,” he says. “With the help of other stakeholders, I think we are getting there.”

Isah’s optimism is not ill-founded. Since the hospital opened its doors in 1999, it has been the only specialized noma facility anywhere in Nigeria. But in May this year, Nigeria Aids Noma Initiative (NANI) began construction of a new 100-bed national noma treatment centre, funded by German non-profit Hilfsaktion Noma e.V, within the National Hospital grounds in the country’s capital, Abuja.

For now, noma patients continue to come to Sokoto from all over the country in search of treatment, often after having been identified by the hospital’s outreach teams. Mulikat Okanlawan was one of the first such patients. More than 20 years ago, and after many years of referrals and failed operations at other facilities, she travelled all the way to Sokoto from Lagos, some 1000kms away, to seek specialized care and finally find hope.

“I used to cry every day. I didn’t associate with anyone due to the stigma. I was alone. But after I was treated here, everything changed. I began to admire myself. I began to relate to other people. I continued my schooling. I began to do everything that I couldn’t do before,” she says.

Having subsequently completed her tertiary education at the local Gwadabawa School of Health Technology, Mulikat now works as a hygiene officer at Sokoto Noma Children’s Hospital, where she also provides psychosocial support to noma patients.

“These patients that come to the hospital, they can see that I was like them but now I am better and I am working,” she says. “It helps to give them courage.”

Distributed by APO Group on behalf of World Health Organization (WHO) – Nigeria.