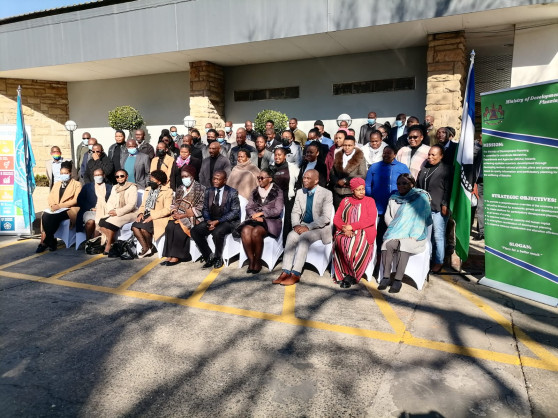 The Principal Secretary in the Ministry of Development Planning, Mr. Sello Tšukuli says the Kingdom of Lesotho is committed to the realization of the 2030 Agenda for Sustainable Development Goals that were adopted in 2015.

He said this when officially opening the SDG Voluntary National Review Validation Workshop held in Maseru on Monday.

Mr. Tšukuli said the main objective of the workshop is to validate the 2022 draft report which has been prepared through a widely consultative and inclusive process.

He noted that the workshop will provide an opportunity and platform for objective and review of the draft Report on Lesotho’s progress towards the implementation of the SDGs.

He mentioned that since the 2030 agenda was adopted, governments, businesses and civil society organisations have moved to embrace the SDGs and have used goals as the centrepieces of their development plans.

He said Lesotho has set a long-term vision, saying the SDGs have been mainstreamed in the National Strategic Development Plan II (NSDP II) which is also an implementation strategy for all international agendas that Lesotho has committed to.

He noted that Lesotho is among the countries that have volunteered to undertake the Voluntary National Review for the SDGs this year under the theme ‘Building back better from coronavirus disease (COVID-19) while advancing the full implementation of the 2030 Agenda for Sustainable Development’.

Giving her remarks, the UN Resident Coordinator, Ms. Amanda Khozi Mukwashi said there were also many consultations with various stakeholders including youth engagement through the U-report and work with the University of Lesotho consultants who were also doing the work on the ground in Mid-April, and then there was the inception report review, which all led to the submission of key messages to the UN Department of Economic and Social Affairs in early May.

“You have all worked very hard over the past three months, and I want to encourage you to keep going as more milestones lie ahead of us, particularly the presentation of the final VNR report at the High-Level Political Forum on Sustainable Development which will be held next month in New York,” she remarked.

She, therefore, commended Lesotho for the commitments and intense engagement in the process, saying this VNR also comes at a time when the world is emerging from the COVID-19 pandemic which has affected one and all.

She expressed hope that this report will provide an insight into the challenges and provide opportunities for the government and its partners to come up with sustainable solutions for the attainment of the SDGs.

She noted that with Goal 15, the government should have solutions to conserve the planet, especially in the context of the damage caused through deforestation, pollution, and land degradation, resulting in losses of natural habitats, saying protecting the planet and preserving biodiversity is key for survival.

When talking of   Goal 4 or Quality education, she stressed that even prior to COVID-19 the learning crisis was there which was further exacerbated with the closure of the schools.

She further noted that the UN is currently preparing for the Transforming Education Summit in September along with the VNR process, saying this is an opportunity for us to reimagine education which facilitates children and young people to not only benefit from the traditional systems of knowledge along with a formal system that prepares them with requisite skills and competencies to lead a fruitful life in the future.

The Validation Workshop proceeded with a panellist from the relevant stakeholders and the report is expected to be submitted to the UN before June 10, 2022.

Distributed by APO Group on behalf of Government of Lesotho.