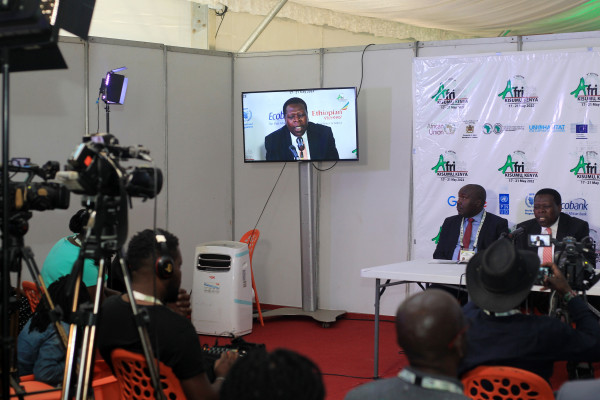 “The mandate that is beginning will be the mandate of all challenges, which we can only take up together and each one separately in its segment. For my part, I will strive to carry our voice as far and as effectively as possible and to contribute to making our organization a key player at the continental level but also at the international level, ” she said. .

The new leadership of UCLG Africa elected for a 3-year mandate is composed as follows:

The Region of Nouakchott represented by Ms Fatimetou Abdel Malick, was elected the new President of UCLG Africa until the next general assembly due to take place in 2025.

The Local Government Association of South Africa, SALGA (Cllr. Bheke Stofile) was designated to be the candidate of Africa for the Co-Presidency of the world organization of UCLG.

“With women on the driving seat of our organization, UCLG Africa confirm its resolve to bring women centered. This is the winning Africa! This is what the world should know about Africa.” said the Secretary General of UCLG Africa, Jean Pierre Elong Mbassi.

Women were on the spotlight during The Women’s Day at the Africities 9. Improving women’s rights till we achieve gender equality is achieved, is one of the main ambitions of UCLG Africa. During the proceedings session by the Network of Locally Elected Women of Africa (REFELA), the participants agreed that ensuring land ownership to women across the continent is one of the ways to achieve this objective. This is a critical factor for the social and economic empowerment of African women, whether they live in urban or rural areas. Women’s role as actors in the economic and sustainable development of territories has to be confirmed. And this approach is part of the REFELA’s campaign, “Women’s Economic Empowerment”

“Agriculture is the largest sector in most of our economies contributing over 20% to the GDP and it heavily relies on women for labour, trading and processing of agricultural products. Therefore, if you really want to emancipate women and be inclusive in development, it is important to address the fundamental right to land for women. When women know they own the land they can make long term impactful decisions about it. One of the ways to do this is to ensure that there’s harmonization amongst laws like traditional laws, marital laws, land laws and the constitutions to avoid any conflict and ensure that the constitutions which guarantee land rights for women” said Joan Kagwanja, Chief of the Land Policy Initiative, United Nations Economic Commission For Africa.

During the Women’s Day, the REFELA presented the “Charter of Local Government on Gender Equality in Africa” which is intended to be a political instrument in favor of strengthening women’s rights at the sub national and local governments in Africa. This Charter commits the territories to fight all forms of discrimination against women to guarantee their inclusion in the development programs of the cities and territories of Africa. This response from African local governments deserves consideration beyond mere membership.

Young people should not shy away to offer themselves for leadership

African youth in its wide diversity is under-represented in the decision-making process. This first Youth Day of Africities addressed the way to improve the involvement of African youth to play a decisive role in local governance as well as at the national level.

“We are galvanizing the energy of young elected leaders of Africa to confront these issues of policies that are not conducive to the development of young people. Young people should not shy away to offer themselves for leadership. The young people of Africa should not chicken out to take up the tough route of fighting and ensuring their voices are heard because real decision makers are not just listeners and beneficiaries of the youth programs and pronouncements. Look, at the age of 27 I was able to go through the difficult route of going through an election, defeating old and rich people that are usually greedy and have no vision to transform lives and give us the Africa we want to see and that is why I’m calling upon all youth to not fear because this is their continent and they are to blame if they do not carry the mantle of leadership” said George Mwanza, Mayor Of Chipata in Zambia.

During this day, the question of leveraging the right partnerships in intermediary cities was at the core of the debates. By putting secondary cities at the heart of national urban strategies, national and local leaders will give a second chance to Africa by engaging larger and balanced territories, leaving no one and no place behind.

The City We Need Now! is a manifesto and a campaign towards the Africa we want. This campaign will not stop at summit in Kisumu. Campaigners will continue spreading the word and raising ambitions for African cities towards the 11th session of the World Urban Forum convened by UN-Habitat in Katowice, Poland, from 26 to 30 June 2022, as well as towards the United Nations Climate Change Conference (COP27) to be held in Sharm El-Sheikh from 7 to 18 November 2022. The campaign will engage the national and sub-national level, regional and local government organizations, civil society and grass roots organizations, urban professionals, researchers, youth and women groups and the media.

On 20 May in the morning, the focus will be on the official opening ceremony of the political segment, marked by the dialogue between former heads of state and young elected officials aged 35 or below leading a local government as mayor or president of a subnational local government.

Distributed by APO Group on behalf of United Cities and Local Governments of Africa (UCLG Africa).