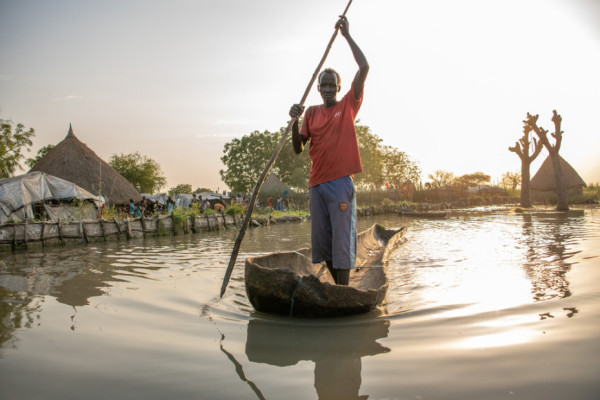 Flooding and displacement in South Sudan are expected to worsen when the wet season begins in around a month, the UN refugee agency, UNHCR, warned on Tuesday.

In 2021, the fragile country – struggling to overcome political and economic challenges since it gained independence in 2011 – had its worst recorded flooding ever, impacting more than 835,000 people, according to the UN humanitarian affairs office, OCHA.

Record rainfall in the past three years and overflowing rivers, have flooded thousands of hectares of farmland in eight states – preventing people from planting crops – and leading to the killing of nearly 800,000 livestock, without anything to feed them.

“This has decimated the subsistence farming that most communities depend upon to survive and substantially worsened food insecurity,” Mr. Harper said.

Moreover, 33 out of 79 counties have been badly affected by the flood waters, which have not significantly subsided since the last wet season.

The impacts are especially harsh in Jonglei, Unity and Upper Nile states, where thousands of people have been displaced or marooned in dike-ringed compounds, holding back floodwaters with mud, sticks and plastic sheeting.

“Such climate events will worsen in future, as extremes become the norm, not the exception,” the UNHCR spokesperson said. “Globally, floods and droughts are becoming more frequent and intense”.

Though contributing least to carbon emissions, developing countries like South Sudan are being disproportionately affected.

During a five-day visit earlier this month, UNHCR Special Advisor Harper toured Old Fangak, Malakal, Jamjang and Bentiu where he saw first-hand the human impact of the flooding.

He recounted that poor road infrastructure, or the lack of any passable roads, make it hard for outside help to reach remote locations, such as Old Fangak in Jonglei state, where a former airstrip is completely submerged and currently unusable for landing.

“In Old Fangak, I met with a twice-displaced woman in her 70s, who spent her days deep in murky floodwaters, desperately plugging a porous earthen dike with sticks and mud, to prevent water swamping the small compound housing her family,” the UNHCR official said. “It is truly heart-breaking to see”.

Ahead of the rains, marooned residents of Old Fangkak said they need water pumps to bail out their compounds.

“Heavy equipment is also needed to make sturdy flood barriers and build mounds to keep their livestock above water,” he continued.

“UNHCR has provided plastic sheets, hoes, spades, and sandbags to help strengthen their flood defences, and is supporting families displaced to Malakal and other towns”.

Visiting Yida refugee camp in Unity state, Mr. Harper witnessed a polar-opposite situation: a region in the grip of drought.

“Access to the most vulnerable populations is a major impediment for humanitarian relief,” he said.

Despite multiple challenges, the climate action advisor observed that “residents have been extremely generous to those displaced by violence or hazardous weather events, often sharing the meagre resources they have.”

However, he maintained, they need “sustained support to avert devastating consequences”.

A case of survival

The UNHCR spokesperson warned that if assistance is not stepped up for the people of South Sudan, “the climate crisis coupled with ongoing insecurity mean that resources will further shrink, leaving people with no means to survive.”

“We know that if we do not act now, the cost will be high, with devastating human consequences,” he concluded.